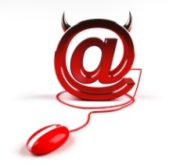 To blatantly say Google is evil is probably unfair. It's more accurate to say Google doesn't plan very far in advance. If it did, it would have reconsidered the motto, "Don't be Evil." Its use was conveniently endearing though and resonated with millions, so it served a purpose. Sergey and Larry have been very public about their high-road partiality, passing up projects with profit potential in favor of user trust, but recently those lines between right and wrong have begun to blur.

Google's goal of organizing the world's information is an ambitious undertaking of proportions known only to God and Gutenberg. With such high aims, one can only assume (and would hope) that Stanford's training ensures invulnerability from human afflictions like greed and egotism, since tongue in cheek observation asserts that geniuses are exempt from such frailties. After all, if one is expected to do the right thing with the world's information, one should be above reproach. And trustworthiness should be real, not a marketing angle.

It doesn't take a genius to realize that such a massive undertaking is going to have its pitfalls and temptations. The first of which is money. Despite the disarming motto and apparent good intentions, Google's Founders actually deviated from its principles in 2004. At that time, numerous Google employees, including its Founders, became billionaires at IPO, the cost of which was dilution of control of the company. One wouldn't say Google is evil because it needed to generate revenue, but Google acted contrary to its philosophy when it went public, because serious pursuits of altruism would demand higher controls, not lesser ones.

Since then, Google has pushed on and is now regarded as the fastest growing company in history. In a devastated economy, Google reigns supreme in income, profits and growth. With unprecedented expansion and tens of thousands of employees, it is unreasonable to expect that every idea driving the tech powerhouse today belong to Sergey or Larry. And not everyone is going to be as kindly, benevolent and good, either. Remember, the first word of human resources is "human".

Perhaps then, it was human failing that possessed the cuddly conglomerate to so coldly launch an algorithmic update that unfairly decimated countless sites, leaving content farms like eHow.com untouched and innumerable false-positives begging. (More on that here and why many web masters who rely on their sites for income, long for viable Google alternatives.)

Or perhaps a lack of human compassion is why Google failed to notice when its engineers roamed neighborhoods in Street View cars, prying into personal networks, gathering personal information from unsuspecting residents and capturing private images on camera. After being confronted in court, Google officials claimed disappointment over the rulings that restrict or curtail its privacy-infringing Street View practices. One might say Google is evil in this case for its lack of contrition doesn't seem fitting for a company whose top priority is user trust.

Still other actions reveal Google as a vigorous defender of individual privacy rights, which could explain why their privacy settings are designed as opt-out only, meaning users are unknowingly opted-in, inadvertently consenting to participation by default.

In a statement on the Googleblog in response to complaints over privacy infringement, Google said, "We don’t always get everything right."

Which is exactly the point. And how one could conclude that Google is evil for even remotely considering it could be infallible.

Ambitions Without Due Responsibility

Besides privacy and also copyright infringement, what about the industries that have been steamrolled since Google's inception, like television, radio, and film, to name only a handful? There is no industry in the world that couldn't stand improvement, but time and again Google designs and doles out free applications that render entire segments of the economy worthless.

How many jobs have been destroyed and industries flattened due to Google's relentless ambitions? In order to avoid being accused of the statement, "Google is evil," shouldn't they have ensured their developments resulted in more construction than destruction?

As major economic sectors are nullified, something else will undoubtedly take their place. The old is always replaced with the new and that is forward progress. But Google is revolutionary. Instead of replacing those sectors with healthy new commercial ventures that build commerce and jobs, Google develops new, free applications for the world to enjoy. And while the world is grateful for the free apps, that essentially puts market share and power of the displaced industries into the hands of one company:

Perhaps that is why some are beginning to think Google is evil, the media rumbles with news of anti-trust investigations and why competitors grumble over anti-competitive practices.

So far, Google has grown on the trust of its users. People have been thrilled by the free resources, the newly organized web and the opportunities for online commerce. For that, few would say Google is evil.

We Do Pay a Price

Yet all these free conveniences aren't really free and the price we're paying isn't openly visible. As investigations are launched and organizations like the FTC step in, it gradually becomes apparent we are paying for convenient access through loss of rights and erosion of freedom. In exchange emerges one company controlling the veritable course of the entire world. It could very well be said Google is evil for its own lack of transparency in this intention.

And although Google claims to be a sentinel of rights online, it knowingly pushes the envelope with minimal self-restraint. As complaints increase, regulators will be forced to do what Google should have been doing all along--exercising responsibility and self-control.

Meantime, while all that settles out, enjoy the free applications and convenient access of information. The next time you wonder if Google is evil, realize they changed their minds about that motto anyway.

Apparently, they didn't really mean it after all.


Return from Google is Evil to Google Not Working Page