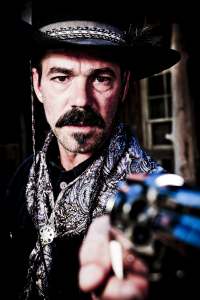 You may have searched the term "Sitebuildit reviews" to get more information on Site Build It!. That's understandable, because reviews can be useful. For example, when a new movie comes out, one looks at the reviews to see if it's worth seeing in the theater. Directors do the directing, actors do the acting and critics do the reviewing. That's the Hollywood way of doing things. And any of those factors can influence how many views the movie gets.

In Hollywood, there are lists like the well-known A list and B list, and classifications like independent and experimental. There are also genres like drama, action, sci fi and the now-faded style called the western. What does all this have to do with Sitebuildit Reviews? Well, the entire Site Build It Scam debacle could be compared metaphorically to those well-known John Wayne film story lines, but with an interesting, mind-bending twist like the one in The Matrix.

Somewhere in the Old West [the Cyber West, that is], lies a peaceful, prosperous valley [Site Build It!]. Residing there are a happy, freedom-loving people [SBI!ers]. They're a passionate bunch and despite sometimes major differences in political, religious and even business views, they co-exist harmoniously and help one another do well and succeed [SBI! Forums].

The virtual valley is a safe, tranquil place, humming along productively, where warm breezes of goodwill and friendship sweep across lush, grassy, sunkissed hills.

One day, a dark cloud drifts over the valley, and into town rides a black-hat-wearing stranger on a high horse. With narrow eyes and a grisly scowl, the stranger spits in the dirt, then whips out a keyboard [there are no guns in the cyber valley]. The stranger shoots up the town by initiating the first of many fake Sitebuildit Reviews. Then proceeds to terrorize the citizens [known online as flaming and cyberbullying] and brow-beats the sheriff [known anywhere as defaming].

Unlike John Wayne films, there are no weak, helpless damsels in this story. Women and men alike, disturbed by the stranger's fallacious and violent display, gathered to defend the town wth vigilante-like ardor. As passions peak pyretically, the dust flies and . . .

(Fast forward here, through the part where Ms. Black Hat sends out a smoke signal to her bandit friends, who grab their guns (keyboards) and rush eagerly to her aid [googlebomb]. You've probably read about the orchestrated avalanche of Sitebuildit Reviews, so it's all rerun anyway.)

Instead, let's skip to the ending with the mind-bending twist. Now, in Hollywood movies, the sheriff gets the bad guy, the bandits wind up in jail and the hunky hero gets the girl. The sun sets in the West and the entire thing is wrapped up in a nice neat bow against a backdrop of the beautiful strumming of classical guitar.

Sorry to shatter the Matrix-like illusion, but there was no blue pill here. This is a red-pill scenario all the way, and the painful reality is, the most evil villain in the Sitebuildit Reviews storyline is Google. Why? Because by tacit consent, Google aids and abets anyone with a grudge or greed to use its algorithm as a weapon. Using feigned neutrality, Google allows bad guys to smear good guys online unless someone from big media blows a whistle. And if one's particular angle isn't "important," media can't be bothered.

If you don't think that's evil, that's not all the Google does. Read the information in the Google section of our site to see what we're dealing with. An empirical statement claims birds of a feather flock together, making it no surprise that Google is a playground for black hats.

Meanwhile, back in the valley, life has returned to normal and things continue to hum along productively and harmoniously, despite the injustice that continues to linger in the search engine results pages. There is hope that one day, Google will do the right thing and deindex the googlebomb and fake Sitebuildit Reviews as it has complete power to do. So far though, the thought hasn't even occurred to them.


Return from Sitebuildit Reviews to Site Build It! Scam HomePage